This destination is a CSV (comma-separated values) flat file. 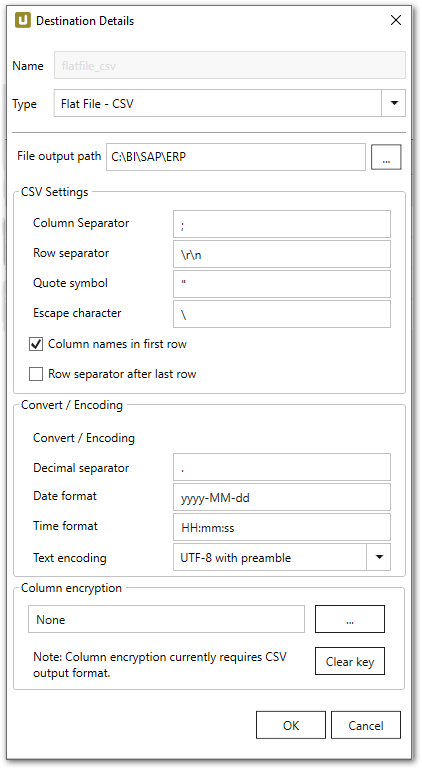 File output path
Enter the directory to save the destination flat files in. If the entered folder does not exist, a new folder is created.

Note: To write flat files to a network drive, you need to:
- Enter the File output path in UNC format e.g., \\Server2\Share\Test\.
- Run the Xtract Universal service by a user with write permission to the directory.

Column seperator
Defines how two columns in CSV are separated.

Row separator
Defines how two rows in CSV are separated.

Quote symbol
Defines which character is used to encase field data. A sequence of characters may be used as “Quote symbol”. Quotation is applied in the following scenarios:

Column names in first row
Defines if the first row contains the column names. This option is set per default.

Row separator after last row
Defines if the last row contains a row separator. This option is set per default.

The “Column Encryption” feature enables users to encrypt columns in the extracted data set before uploading them to the destination. By encrypting the columns you can ensure the safety of sensitive information. You can store data in its encrypted form or decrypt it right away.

The feature also supports random access, meaning that the data is decryptable at any starting point. Because random access has a significant overhead, it is not recommended to use column encryption for encrypting the whole data set.

Note: The user must provide an RSA public key.

The decryption depends on the destination environment. Implementation samples for Azure Storage, AWS S3 and local flat file CSV environments are provided at GitHub. Included are the cryptographic aspect, which is open source and also the interface to read the CSV data and “metadata.json” which is not open source.

The encryption is implemented as a hybrid cryptosystem. This means that a randomized AES session key is created when starting the extraction. The data is then encrypted via the AES-GCM algorithm with the session key.
The implementation uses the recommended length of 96 bits for the IV. To guarantee random access, each cell gets its own IV/nonce and Message Authentication Code (MAC). The MAC is the authenticity token in GCM providing a signature for the data. In the resulting encrypted data set, the encrypted cells are assembled like this: