Click Extraction Settings in the main window of the component. The window “Cube Settings” opens. 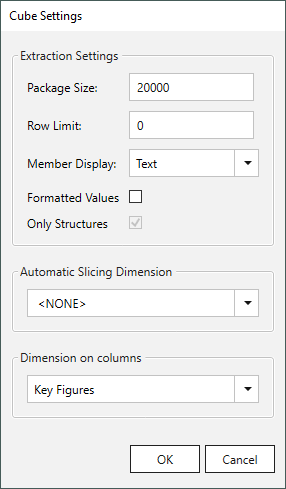 Package Size
Defines how many data records are fetched from SAP in a data package. Values between 10,000 and 100,000 are practical for large data volumes. If the value is set to 0, the complete result set is fetched at one time. This option is not supported when using BICS mode.

Row Limit
Defines the maximum number of rows in the result set. If the value is set to 0, the complete result set is fetched. This option is not supported when using BICS mode.
You can use Row Limit to perform tests with a small amount of data by entering a row limit of e.g., 1000 (not 0).

Formatted Values
If this option is active, the values of key figures are formatted as defined in the Query Designer e.g., scaling factor and number of decimal places.

Only Structure
Activate Only Structure if your BW Cube extraction was created in an old version of the BW Cube component. The method for the metadata retrieval has changed, which affects especially BEx Queries with two structures.
This option can only be activated and deactivated in the Look Up window of the component.

This option sets a dimension for an automatic slicing. Slicing is the act of picking a subset of a cube by choosing a single value for one of its dimensions. Automatic slicing means that a loop is executed for each single value of the chosen slicing dimension (characteristic) to extract the result from BW.

Automatic Slicing Dimension allows the extraction of a large amount of data (millions of records) from BW.

Recommendation: We recommend only using structures on columns. 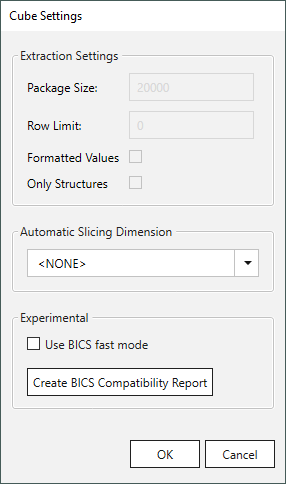 Create BICS Compatibility Report
As the BICS mode is still in beta phase, you may encounter errors when using this component. Click [Create BICS Compatibility Report] to run a number of tests to help us analyze why and where the error occured.
The test results are automatically stored in a .zip file. If you have multiple different SAP systems, perform this test on each of them.
Send the resulting .zip files to the Theobald Support team.