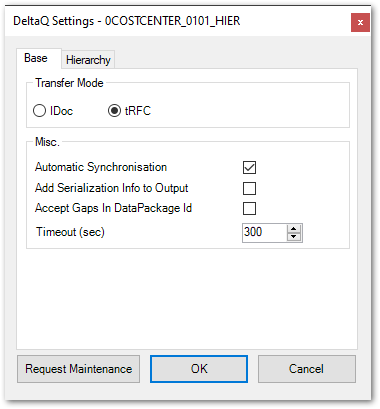 The base tab consists of two subsections:

Automatic Synchronisation
Depending on the system landscape it could happen that developments only be performed in a test system. If SSIS packages should be used later in the production environment, the data source has to be enabled there. To avoid manual changes in the transactional system you can activate this option. In this case the activation will be automatically done and the timestamp of the data source will be changed that it will be consistent to the SAP system setting.
If the DataSource was modified in the SAP system, e.g. a field’s name, data type or length was changed or a field was excluded from data transfer, you will still have to manually activate the DataSource in the DeltaQ component, even if Automatic Synchronisation is switched on. Otherwise data load will fail. This behaviour is by SAP design and is described in SAP help.

Add Serialization Info to Output
Adds the two columns DataPackageID and RowCounter to the output.
In this Case the following three columns which are a composite key of the records delivered by SAP, will be available in the output:

Accept Gaps in DataPackage Id
The Delta Q component makes at the end of each extraction a consistency check. Only when all data packages have arrived correctly, the extraction is considered consistent. In the case that the customer has built a filter function in the user exit of an OLTP source that causes certain data packages to not be sent, the consistency check must be mitigated. Otherwise the customer filter function would be seen as inconsistency. If this option is activated, gaps in the packet numbering will not be counted by the DeltaQ as inconsistency but as intentionally withheld information. The option should only be used if a corresponding filter function exists in the user exit.

Timeout (sec)
Defines a time period (in seconds) how long the Xtract Product will wait, after the extraction job on the SAP side is finished but not all tRFC calls have been received, yet.

To show and delete the init requests of this DataSource (requests in RSA7). 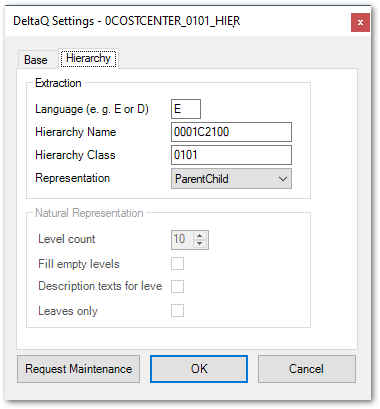 Language
Defines the Language, if a Hierarchy is extracted.

Fill empty levels
If the representation Natural is selected, the bottom element of the hierarchy will be copied until the last level. In the following screenshot you will see the hierarchy from above with the option Repeat Leaves activated.

Description texts for levels
Means, that the output has a field LevelTextN for each field LevelN, that contains the text based on the system language settings.

Leaves only
Delivers only the leaves as data records.